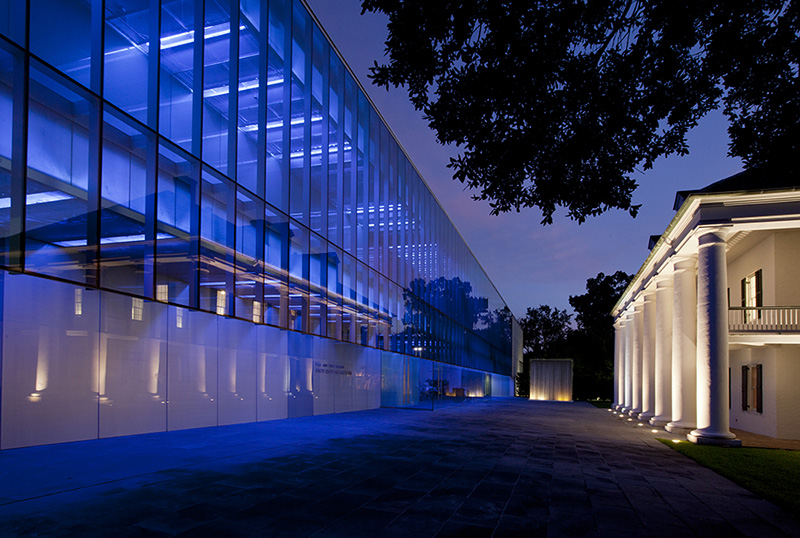 The Hilliard Art Museum is a world-class building providing exhibition facilities designed to meet the highest standards in the museum industry. Visitors experience a complex series of naturally lit spaces, juxtaposed with precisely tuned exhibition galleries where the enjoyment and appreciation of art is the main attraction.

The new building, designed by Eskew Dumez Ripple, an architectural firm located in New Orleans, is a 33,000 square foot minimalist structure. It stands juxtaposed with the Museum's original building designed by noted Louisiana architect A. Hays Town. The building’s glass façade hovers above visitors entering the museum, reflecting in its surface the existing Hays Town Building and live oaks of the surrounding garden. Depending on position and time of day, the glass façade oscillates between opaque and transparent, and at night is rendered a deep blue by the cold cathode tubes located above the perforated metal ceilings. The dynamic juxtaposition of old and new architecture represented by the Museum's two structures is bridged by a 7,000 square foot plaza paved with Italian limestone, culminating in a dramatic 225 square foot water wall. The sleek 21st century building reflects the architecture of our time, utilizing steel, stone and glass. 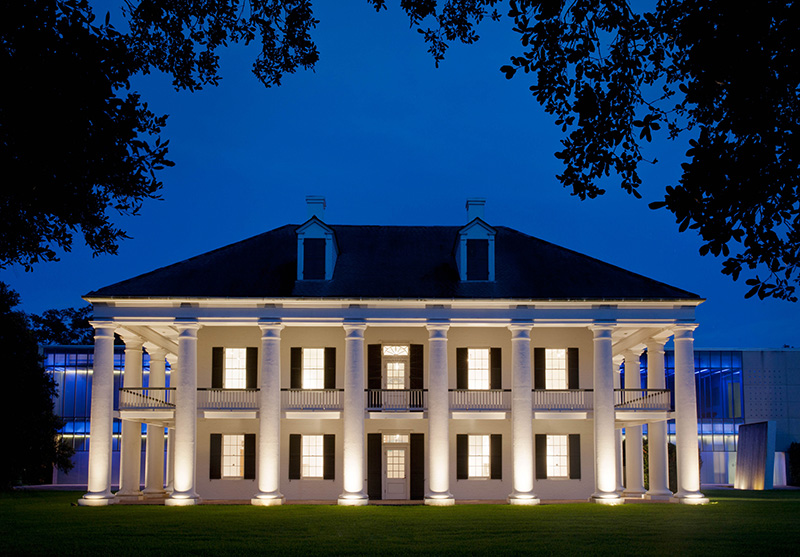 Built in 1967 by A. Hays Town, A.I.A., (Class of 1922, b. June 17, 1903, Baton Rouge, Louisiana d. January 6, 2005) on donated property by Mr. and Mrs. Maurice Heymann. The University's original Art Center was designed after the 1812 Hermitage Plantation in Darrow, Louisiana. The building is completely surrounded by 24 Doric columns. Which were laid in the original Greek revival manner and made of pie-shaped bricks and covered with plaster, the traditional method of finished columns. The bricks were specially made and laid in a circle reducing by one at each third of the way up the column. This method called entasis produces a slight narrowing of the vertical column.

Originally the exterior was highlighted by the unusual pale pink color, an authentic reproduction of a color that was popular in the late eighteenth and early nineteenth centuries in colonial Louisiana and was used on many houses and public buildings. Made by crushing old brick and mixing the brick dust with the paint base. The softly glowing pink would fade to the desired color in a few years. The building is still referred to this day as the pink elephant by many.

The staircase railing, newel post, and 225,000 bricks were salvaged from Martin Hall; the University's administration building which was demolished in 1963 and replaced by a new building bearing the same name. Additional reused material included cypress flooring from an early New Orleans convent, and French slate tiles which entered into the port of New Orleans as ballast in sailing ships and were used for the original roofing.

Louisiana Cypress in the library room was finished in the traditional hand rubbed manner using a combination of lye, vinegar, and a final coating of beeswax. Hot beeswax applied to the traditional pattern brick flooring used in the building gave a permanent finish to the surface. The empire style sunburst motif on the library fireplace was hand carved by a local craftsman from Breaux Bridge, Louisiana. Craftsmen using wood and tin molds applied traditional plaster cornices on the first floor.